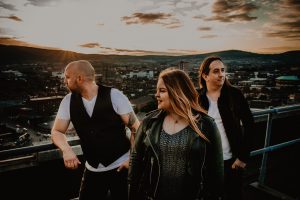 The Rising are a songwriting and production duo. Their music can best be described as blending the fresh-faced sounds of today’s Pop/Rock with Modern Country Stylings/Americana stylings fresh from Nashville. Proud to be completely DIY Artists the duo write, record, mix and play all the instruments featured on their music.

Based in Leamington Spa, UK for several years. But, due to pressures associated with lockdowns throughout 2020 – 2021 the duo were forced to move back to their native home in Belfast, Northern Ireland.

Constant touring across Ireland, UK and Europe has allowed the band to build up a healthy fanbase as well as perform at prestigious events such as The Big Feastival, Pub In The Park, Godiva Festival and Country 2 Country Festival in London’s 02.

The duo have released one full-length album (on Vinyl) and several EPs. However, in 2020 the duo embarked on a strategy of releasing a single every six weeks. This constant work ethic resulted in the band being named Band Of The Month on BBC Introducing.

Their name however, comes from a Bruce Springsteen album that has and continues to inspire all members of the band

“Choruses and tunes which aim for anthem status.. The Rising are definitely a band to watch.” – Golden Plec

“This impressive song from The Rising is sure to make a lasting impression on its listener. With a contemporary vibe, bubbling banjo undercurrents and guitar-driven arrangement reminiscent of one of Keith Urban’s many hits, this one is sure to do well.”  – Maverick Magazine

Even The Stars Fall For You (Official Music Video)