We are so happy to announce our new single, “Bruise You Left” will be released on 4th June 2021. Bruise you left is the second single from our upcoming five-track EP ‘No Hope Without Love’. You can pre-save the song on all digital platforms by clicking HERE.

You can also buy a signed limited edition (Limited to 50) CD copy of the EP.

No Hope Without Love [EP – Signed]

Physical CD single of ‘No Hope Without Love’.
Limited to 50 copies
Fully Signed

The song was written and recorded completely independently by Chris and Chantelle during lockdown at their own recording studio. The Drums however, were tracked by Chris Brush in Nashville, TN. The track was Mastered by Pete Maher (U2, Rolling Stones, The Killers, Snow Patrol and many more).

Written by the duo the song started out as a title, melodic idea and a drum machine pattern. Since the beginning, the duo have kept with a routine of keeping a weekly allocated “writing session”. This is where the duo get together to focus solely on writing. They will swap ideas, show each other what they have been working on or start a brand new song together. This song was written over the course of two weekly writing sessions.

The premise behind the song is the hurt caused by a long-term relationship coming to an end. Despite promising never to hurt each other, in the end, they do. Those wounds take a while to heal, some never do. So, whilst they may be in a better place apart the wounds/bruises of the relationship will stay with them forever.

In something that has become something of a trademark, the duo enjoy putting darker lyrics with upbeat music.

Throughout the making of this song the duo experimented with sound and sonic textures. One such example of this is the percussion elements. Pinned against the live drum kit is a series of drum loops that were made by chopping up percussion sounds, processing and reversing the sound to create a interesting texture. Something the duo really enjoyed doing. Treating the recording studio like another musical instrument. Something they look forward to exploring more in the future.

We are so happy to announce that our brand new single “You Had It All” is out now. You can stream the single across all digital platforms by clicking HERE.

We are super excited about this single because its the first time we have featured a guest singer on any of our music. Namely, this track features Stephen A. Quinn. Stephen initially brought the song to us and we collaborated heavily on the song. Bringing it to life. Stephen is also a super talented artist and his art adorns the cover of the single.

The song itself is based upon the story of a very personal breakup. But, we all thought that it would be interesting to turn the song into a duet. Allowing us to take the listener on a journey and explore two narratives. In essence, making the song a conversation between the two characters. Where the characters jostle with their respective emotions until they realise that neither has won, they have both lost something.

“You Had It All” is the first of five singles from the upcoming EP “No Hope Without Love”.

We are so happy to announce that our next single will be called ‘Aint Nobody Got Me Here But Me’ and it will be out on 29th January 2021. It is available to Pre-Save on Spotify now by clicking HERE.

The song itself is probably the most personal song we have ever written. It is written about the inner battles we face as independent musicians and all the sacrifices we make in the pursuit of our dreams. Be it a steady income, the ability to have a comfortable life, the ‘normal’ life path and of course dealing with the constant rejection. Knowing that your love of music will carry you forward. However, what happens when love isn’t enough to get you through and you want to give up. But we learn to accept this situation and as much as we may moan about it and wish for a more comfortable life we know that we cannot blame anyone for the decisions we make and we have to live with those decisions. There “ain’t nobody got me here but me”.

The song is written about the personal account of Chris and his most recent struggles of whether to continue with music or give up, realising that time may have indeed run out, especially as lockdown began and all planned work, festivals and tours were cancelled. Recalling the various stages of depression with lyrics that recall “spending my life thinking of a way I can make it out”. Also, the somewhat tragic yet witty recollection of buying a phone to make an urgent call for help only to find that the phone didn’t work. The song also recalls all the people who have come and gone and all the people who constantly tell you to “get a real job”. The song does however have a slight glimmer of hope when Chantelle spends her last pay cheque on a guitar as a declaration of faith and belief that everything will be alright.

We are so pleased to announce that our brand new single will be released on 11th Sept and it will be called “Better Than This”.

The single is available to Pre-Save now via Spotify. Just CLICK HERE to pre-save.

As usual being independent artists we urgently need every pre-save we can get. So we beg you to please save our new single. Are are running a competition for pre-saves.

However, if streaming isn’t your thing and you prefer a physical CD. Well, do not fear we have a limited number of CDs available for pre-order below. We also have digital singles and artwork available to buy directly from us. Check out the items exclusive to this single below.

The single was recorded during lockdown in the band’s own recording studio Renegade Studios and also remote recording in Nashville, TN with drummer Chris Brush.

Better Than This is an uplifting story which deals with the theme that no matter how hard things seem, they can always get better. It follows the two central characters. One, is a singer songwriter who is struggling hard playing in all the dive bars She can to make a go at being a successful musician. But no matter how hard they try they just can’t seem to make any progress. The second character a successful business Man who ends up loosing everything because they squandered all their money playing a game of keeping-up-with-the-Jones’. So they are forced to get a new job to rebuild everything. As the two characters continue on with their journeys they cross paths in the middle and realise that things will get better and they just have to keep working on their dreams.

This song recalls heavily on the duos love of storytelling and the musician character is semi-autobiographical, covering the struggles of being an independent musician in today’s world. Especially with the current climate where musicians main revenue stream is being pulled away from them due to the worldwide pandemic. But within that darkness we must have faith in our dreams and push through, knowing that things will indeed get better. A universal message for everyone. 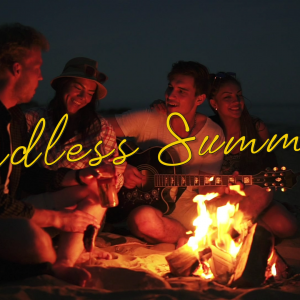